I discuss the gist and limitations of my implementation of Joe and Simpson’s visibility polygon algortihm, that is, an asymptotically optimal algorithm for computing the visibility polygon from a point inside of a simple polygon.

Recently, I took a course on computational geometry and got interested in the notion of visibility. Besides its applications in hidden surface removal (HSR) algorithms and exact robot motion planning, it received a great amount of attention through the art gallery problem. The first application I could think of when thinking about visibility were video games that incorporated a fog of war, that is, the computation of a player’s surroundings that is visible to him as he navigates a map. Unfortunately, the algorithm we will be talking about doesn’t work with obstacles, making it of limited use in games.

There are many different types of visibility problems, some deal with finding viewpoints to illuminate certain parts of the environment, while others deal with computing visible parts of the environment for a given viewpoint. Some of them consider a single viewpoint, some consider multiple viewpoints, and yet others consider different types of view elements than a point—the list goes on and on. In this post we will focus our attention on the following variant.

Problem Statement. Given a viewpoint $z$ inside of a simple polygon $P$ with $n$ vertices, we want to compute the visibility polygon $VP(P, z)$, which consists of all points in $P$ visible from the viewpoint $z$. We say that point $p$ is visible from point $q$ (and conversely, $q$ is visible from $p$) if and only if the line segment $\overline{pq}$ lies completely in $P$.

The above approach is simple yet computationally inefficient for large polygons. Fortunately, more efficient algorithms have been published. For example Asano’s $\mathcal{O}(nlogn)$ time sweeping algorithm and Joe and Simpson’s $\mathcal{O}(n)$ time algorithm (yes, those are the ones used by CGAL).

Quick Background of Joe and Simpson’s algorithm. Linear time algorithms have been shown to be optimal for computing the visibility polygon from a single viewpoint inside of a simple polygon. Such an algorithm was first proposed by ElGindy and Avis, it requires three stacks and is quite complicated. Then, a conceptually simpler algorithm requiring only one stack was proposed by Lee. Later, Joe and Simpson showed that both algorithms return wrong results for polygons that wind sufficiently, they published a correction of Lee’s algorithm. It is their algorithm that we’ll take a look at.

Instead of a futile attempt to try and capture the algorithm in more detail than Joe & Simpson did, I’ll present to you an overview that will be enough to understand the main idea. We’ll also take a closer look at parts of the algorithm for which there is no pseudocode in the paper—the pre- and post-processing.

The algorithm runs in $\mathcal{O}(n)$ time and space. It makes assumptions on the input which we establish in the preprocessing step—this produces a list of vertices $V = v_0, v_1, \cdots, v_n $ that represents the boundary of $P$ in a specific order, depending on the position of viewpoint $z$ as described in the paper (section two, first two paragraphs).

The preprocessing will shift the polygon such that the viewpoint $z$ becomes the new origin and it will rotate the polygon such that the closest vertex $v_0$ lies on the x-axis next to $z$—this ensures a line of sight between the first vertex in $V$ and our point of reference $z$ which makes the algorithm’s subsequent design simpler. We’ll make rotations simpler by working with coordinates in polar form.

Then the algorithm proceeds towards its three main procedures—Advance, Retard, and Scan—that handle the three different scenarios that can occur during the monotone scan of $V$—that is, of $P’s$ boundary. While iterating through $V$, a stack $S = s_0, s_1, \cdots, s_t$ of vertices is maintained—it represents a possible subset of vertices of the final visibility polygon. Note that vertices in $S$ are not necessarily vertices of the final visibility polygon. The three procedures are responsible for handling vertices while iterating through $V$ such that the final content of $S$ is all the information necessary for the postprocessing step to construct the final visibility polygon. Advance is responsible for pushing vertices from $V$ onto the stack $S$, retard for popping vertices from the $S$, and scan for skipping vertices in $V$ that have no business modifying $S$. Assume that $V$ is being scanned with $v_j, v_{j+1}$ as the current edge, and that $v_j$ is visible—for $v_{j+1}$ one of the following three cases can occur:

The algorithm switches between the three procedures until $V$ is scanned completely—at this point $S$ contains all the necessary information to construct the final visibility polygon. The switching between procedures depends on the cumulative angular displacement of scanned vertices with respect to the viewpoint $z$—it is modified upon handling a new vertex from $V$, exactly how is described in the paper.

Time and space complexity. Each vertex is scanned just once, at most two vertices are pushed onto the stack $S$ at each iteration, and popped vertices are never pushed again. This implies that $V$ and $S$ contain a linear number of vertices with respect to the input polygon’s size $n$. Hence, the algorithm runs in $\mathcal{O}(n)$ time and space.

What I left out. The degenerate cases and intricacies regarding the angular displacement and how this affects the switching between advance, scan, and retard with a detailed example on how exactly this algorithm avoids errors made by previously published algorithms is contained in the paper. It also contains the rationale that justifies the use of angular displacements and of course a proof of the algorithm’s correctness.

I included tests of the pre- and post-processing steps, see TestPreprocessing.java and TestVisibilityPol.java for details. All of the following visualizations can be reproduced via the DrawVisibilityPolygons.java file.

Given the input polygon $P$ and a viewpoint $z$ I created tests for the following six scenarios. The polygon can be either convex or concave, for both types $z$ can be in $P$’s interior, or on an edge of $P$’s boundary, or on one of $P$’s vertices. The following figures are visualizations of those six scenarios. 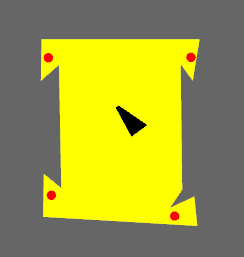 The VisibilityPolygon class can be used to compute the visibility polygon from a point inside of a simple polygon (given as n vertices in counterclockwise order) in O(n) time and space. Here is an example:

Another approach for obtaining a less robust but presumably more efficient implementation would be to modify the predicates and experimentally assess the improvement in robustness. In order to implement the above algorithm in a robust manner, it is necessary to robustly implement the predicates upon which it relies. The algorithm repeatedly runs a two dimensional orientation test to determine whether a point lies to the left of, to the right of, or on a line defined by two other points. It also computes intersections between lines and segments, half-lines and segments, and between two segments. We will see that all the predicates can be reduced to orientation tests.

For the orientation test we use the determinant approach—it’s fast and immediately applicable to double precision floating-point inputs.

The orientation test is performed by evaluating the sign of $orientation(A, B, C)$:

At this point I’ll quote Schirra’s advice that is directly applicable to our problem:

The straightforward approach to implement geometric algorithms reliably is to use exact rational arithmetic instead of inherently imprecise floating-point arithmetic. Unfortunately, this slows down the code by orders of magnitude. As suggested by the exact geometric computation paradigm a better approach is to combine exact rational arithmetic with floating-point filters, e.g. interval arithmetic, in order to save most of the efficiency of floating-point arithmetic for nondegenerate cases. This approach is implemented in the exact geometry kernels of CGAL and LEDA. The use of adaptive predicates `a la Shewchuck is highly recommended.

Therefore, the algorithm’s robustness issues could be partially resolved by replacing the current naive implementation of the orientation test by Shewchuk’s adaptive approach. It would be interesting to compare the impact on robustness and running time when substituting the current orientation test for Shewchuk’s more robust but presumably slower approach. Note that my implementation would still fail after the substitution because of round-off errors—even if all orientation tests are performed flawlessly—due to comparisons between doubles that are sprinkled all over the code.

In this post we discussed the gist behind Joe and Simpson’s algorithm for computing the visibility polygon from a viewpoint inside of a simple polygon and concluded by taking a look at the robustness issues of my implementation. We saw how to establish assumptions about the input that were made in the paper—the preprocessing step. Then, we discussed the main idea behind the three routines—Advance, Retard and Scan—and in what manner they modify the stack. We took a look at how the final visibility polygon is constructed using the stack’s content left by the three subroutines after the algorithm finished iterating through the polygon’s boundary—the postprocessing step. We concluded with a discussion on robustness issues where we mentioned an approach to resolve them—arbitrary-precision arithmetic —and an idea for future work that makes use of adaptive predicates. 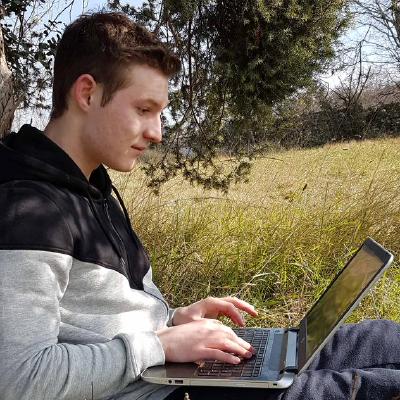